Skip to content
Fringe Facts – Things We Never Think About

A woman walks into an elevator, no wait, it’s a bus… or is it a parking garage… actually it doesn’t really matter, I don’t have a punchline… 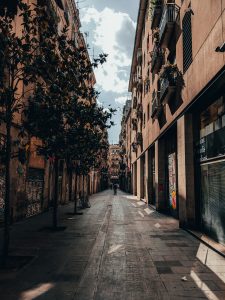 …But while we’re here, let’s talk about Fringe Areas since they tend to have higher crime rates, especially after dark.

In case you don’t know what a Fringe Area is, they tend to be places on the periphery or on the way to and from somewhere else, hallways, stairways, back ways, elevators, alleys, parking lots, garages, etc. Though Fringe Areas can pretty much be any place where something can happen and no one can hear you or get to you in time. So a fringe area could also be the bathroom at a club where you can be raped but the music is too loud or everyone too stoned to hear you or do anything about it. It can even be the back of a bus if everyone is up front – the Fringe of the bus, so to speak. It could be a room of a house during a party for that matter. I could even be your house during a home invasion if your neighbors are unlikely to hear you or intervene. Buses, trains and elevators are a sub-category of Fringe Area–call them Confined Mobile Fringe Areas (CMFA?).

If all these places are Fringe Areas, what isn’t? A Fringe Area is not just any place a crime occurs, though it does constitute many of them. Tienenman Square was not a F.A., neither is bank when it is robbed. So, to clarify, I guess you could say a F.A. is any place your instincts tell you (or should) that you need to be a little extra vigilant. Specifically its anywhere it would take more than a few minutes for you to get help or for help to get to you. Wait… maybe a bank during a robbery would qualify. So you can see this is hardly an exact science.

Despite the now infamous, Delhi bus gang rape and murder, the statistics I found seem to imply CMFAs are actually less dangerous in general than regular Fringe Areas. Perhaps it’s because there isn’t always an easy out on a moving vehicle and a predator doesn’t know who’s going to be there when the doors open.

Okay, so then I thought, maybe things don’t happen there as often, but they BEGIN there. In other words, you’re stuck in one of these places long enough for someone you don’t know to get too close. Maybe he gets fixated and decides to follow you somewhere else. There probably aren’t any statistics on this, but it’s the beginning of very thin theory! So work with me.

So how do you act in a Fringe Area? Is there a specific sort of body language to use or a way to avoid looking like a free meal? What can women do to avoid overly solicitous people, gropers and even violence on trains, planes and in parking lots? How can we use our awareness, eyes and body language so we don’t attract the wrong kind of attention?

Do we stare at the ground? We don’t want to be blind to our surroundings. Do we engage animatedly in conversation with various people? This is a survival instinct commonly used by people when they’re uncomfortable. I don’t think most people who do it would label it as such, but such it is. By bringing others into the fold you are pre-arranging help should something go down. You are counting on the people you smiled at to watch your back. You’re assembling a team and in so doing you’re hoping to avoid the interest of anyone who thinks you’re alone. You’re simultaneously saying to whomever might be checking you out and hatching unclean thoughts, that you are outgoing, you have friends and you are therefore not an easy or timid target.

That’s what you think you’re saying, anyway. What you might be saying to an experienced predator is, I’m scared.

So, a few thoughts on Fringe Area Behavior:

Suggestion #1: Don’t be there or only spend as much time as you need to. Don’t dawdle (I’ve been dying to use that word in a sentence). Look focused, not worried, and carry out your plan while maintaining general situational awareness.

Suggestion #2: Try not to be alone. There is something to the safety in numbers thing.

Suggestion #3: Especially after dark or in unpopulated areas, carry a weapon of some sort that you can access quickly if need be. This could be any kind of improvised or standard implement. Access is particularly difficult for women whose clothing changes and who don’t often have easy access pockets. Purses are problematic. If you have a weapon with you but cannot get to it you may as well not have brought it.

Suggestion #4: Maintain your strongest posture. Don’t telegraph to anyone lurking in a doorway that you are tired, sick or injured if you can help it.

Suggestion #5: If you are alone and you see someone in need, be very suspicious. Tell them you’ll go get help and run. When you’re in a safe zone call for assistance. Tell them what the situation was and be direct, tell them either someone needs help or it’s a scam, possibly a dangerous one. Either way someone should check it out. DO NOT ask the first person you see. If you don’t have a phone, look for an open store and use the phone there.

Suggestion #6: Put away the bling! Don’t attract attention. Do you really want to tell the world, especially when you’re in a vulnerable position that you have things they don’t or that you’re a walking ATM?

Suggestion #7: If you’re in another culture, there are a whole bunch more rules you need to know. Preferably you should find out what the key cultural behavior points, dress code, etc. are before you leave. In general, even if you’re with a friend, keep your voice low, don’t talk trash, be respectful. Don’t sit on the Mosque steps and smoke! Probably better not to spit either!

Suggestion #8: Might better not to look too good or show too much skin. If you’re leaving a party and heading for your car (and no one you trusted could walk you there) and you have a shawl or coat, put it on. If you’re wearing heals, change them out for sneakers. Do you really think you’re going to meet Prince Charming in a gas station rest room? And if he is Prince Charming, he’ll see you through the ugly shoes!

Suggestion #9: Do I have to say it? Stay off the phone, please. Don’t wear headphones. Be aware of anyone walking up to you, even if they are looking a different way. Be aware of loitering groups. Don’t walk between people if you can avoid it.

Suggestion #10: Don’t Stare or even make eye contact for more than one second at a time or less. I tend to zone my gaze to a middle area, which allows me to take in a large area with my peripheral vision without looking like I’m focusing on any one thing or person. And I change position often in tight spots so as not to give anyone lengthy access to my bag, pockets or body.

Look at lower faces or hands, or wear sunglasses (make sure they’re the kind that actually completely hide your eyes) so you can observe without appearing to stare.

Suggestion #11: Be actively conscious of your surroundings. Look, Listen, Smell even! I’ve been on trains where men sat next to or across from women and talked about what they’d like to do to them. This can just be disgusting banter or it can be part of an interview to see what your reaction is. Though you may be thinking it would be better not to hear this, what if that was your chance to notice these guys before they follow you home?

Suggestion #12: Wherever you are, the rules of the general culture probably apply to CMFAs but in exaggerated form. The way fame seems to exaggerate personality (a creep becomes a bigger creep, a recluse a hermit, etc.), underground culture seems to bring out the personalities of its riders and exaggerate rules and responses.

So, observe the general rules of the country, city, town you are in. This especially regards rules of too little clothing, overly assertive eye contact and talking too much. These rules can be especially harsh for women in some places in North Africa and the Middle East to name a few places, especially in markets, where groups tend to loiter and look for confused foreigners.

Suggestion #13: If someone sits next to you on an empty bus or train or stands next to you in an empty elevator, he is probably up to something. Don’t make a big deal. Try to casually move or get out as soon as you can. This is another reason to have some sort of weapon on you and ready to go. If this is a ploy, you may not have much time to respond to someone sitting right next to you.

Just for fun over the next few days make a point of naming the fringe areas you pass. Criminals are intimately familiar with these places. They are like fish looking up at bugs on the surface of the water. They are in their comfort zone. You can see them there, but only with practice.